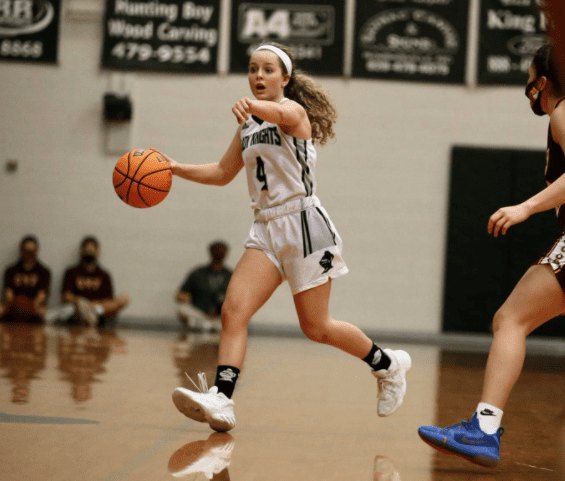 Earlier this year, The Lady Braves won the first matchup between the two teams, beating Robbinsville 70-57.

This was a pretty big game for both teams all things considered. Cherokee needed a win to keep their hopes of a share of the SMC Championship alive. Robbinsville needed a win in order to avenge their lone loss on the season, and to keep their chances of winning the outright SMC title.

It took seven periods of basketball to get it done, but the Black Knights were able to topple the Braves in triple overtime!

The first period ended with the Black Knights on top 17-10, but that lead would not last long as it was a stalemate heading into halftime with both teams tied at 30 a piece.

The third period was all Lady Braves, as Cherokee scored 21 points and took a 51-41 lead to the fourth.

In the fourth quarter, the Lady Knights showed just how tough they are defensively, only allowing the Braves to score 6 points in the entire quarter. Desta Trammell, Halee Anderson and Kensley Phillips helped the Knights climb back into it offensively and the team as a unit scored 16 fourth quarter points to tie the game at 57 and force the first overtime.

Desta Trammell led the Knights with 32 points on the night, and Halee Anderson and Kensely Phillips also poured in 14 and 12 respectively.

The Lady Knights will host Swain County on Friday and travel to Andrews next Tuesday.

If they are able to beat Swain and Andrews and Murphy is able to get through the rest of their schedule unscathed, the matchup on 2/18 between the Lady Knights and the Lady Bulldogs will be for the SMC Championship.