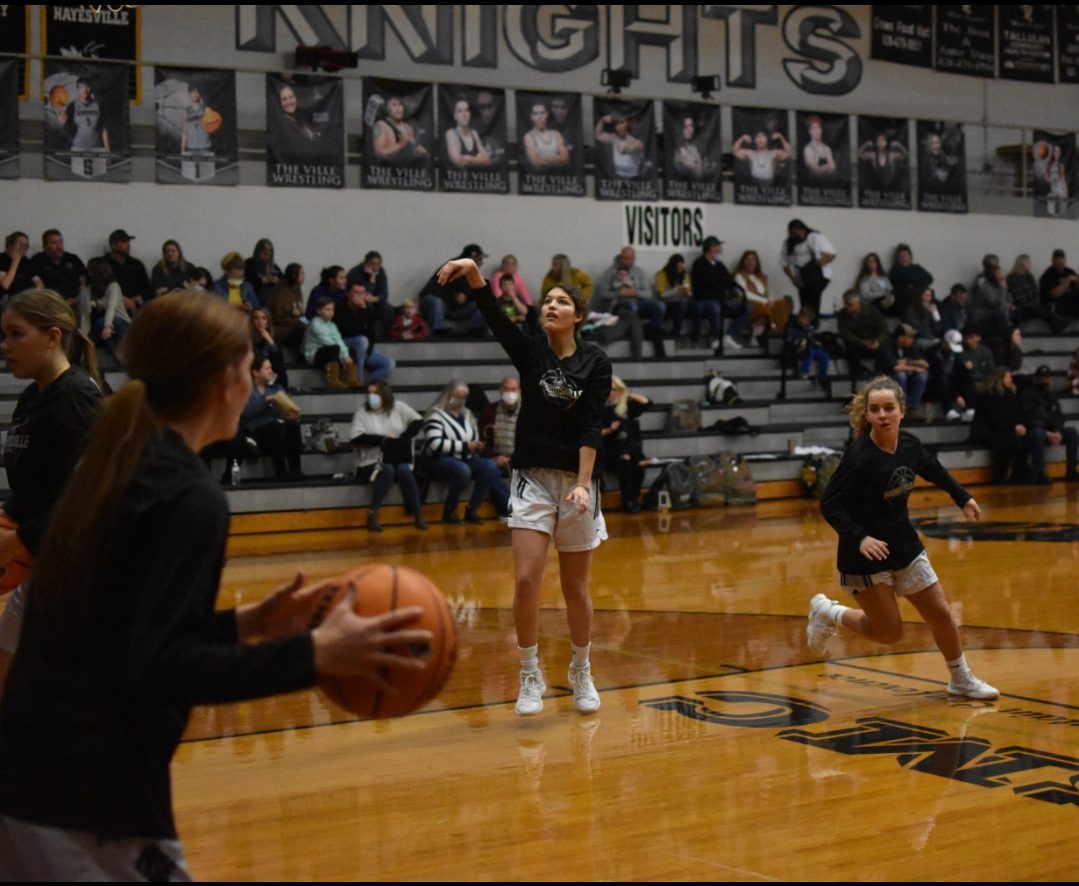 Bryson City- Two of the top girls teams in the state went at it for the third time in the past month on Tuesday, this time in the semi-finals of the Smoky Mountain Conference tournament. Cherokee was looking to avenge their 2 regular season losses by knocking off the Knights when it mattered, but they were unable to do so as the Lady Knights made it three in a row against Cherokee with a 65-58 victory.

The Black Knights got it done in the trenches, out rebounding the Braves and hitting all but 3 of their free throw opportunities. Desta Trammell was the leading scorer on the night with 27, but Halee Anderson was the difference maker in this one, posting a line of 11 points, 13 rebounds, 5 steals and 1 assist. Anderson and Zoie Shuler did a lot of things for the Knights that won’t show up in the stat book

In the first, the Lady Braves had their role players involved early and often, as Loshi Ward and Aryionna Hill lit up the scoreboard and gave Cherokee a 17-14 lead at the end of 1. Lady Knights Head Coach Lucas Ford made some quick between-quarter adjustments though, and Robbinsville went on a 13-3 run to start the second. Thanks to Halee Anderson’s 6-7 performance from the line and a buzzer beater layup from Delaney Brooms, the Knights were able to take a 35-29 lead into the break.

After a sloppy third quarter, Cherokee’s Whitney Rogers got the Lady Braves right back in it with 5 quick points to start the fourth. Robbinsville held a 49-44 lead with 5:11 left in the game, but Rogers drilled her 8th p0int of the quarter from behind the arc, and cut the lead to just 2. After some big time Zoie Shuler offensive rebounds, Desta Trammell was fouled on a three point shot and hit all three free throws that followed, making it 52-47. The Black Knights eventually built their lead up to 9 at one point with less than four minutes to go, but Leilaya McMillan was not going to allow the Lady Braves to go quietly. McMillan was bale to grab a quick steal and bucket to cut the Knights lead to 59-56, but it was too little too late from the Braves as Robbinsville took the win, 65-58.

Up Next for the Knights-

Friday night at Swain County High School, Murphy and Robbinsville will face off in the SMC Tournament Championship game. Murphy bested Robbinsville twice in the regular season, but it is always a dog fight each time these two teams take the court.

Tip off will be at 6:30, but you can bet the gym will be packed with fans of all teams wanting to see some good basketball, so get there early for a seat.

steal from mcmillian makes it 59-56 rville with 2 minutes to fo in the game.