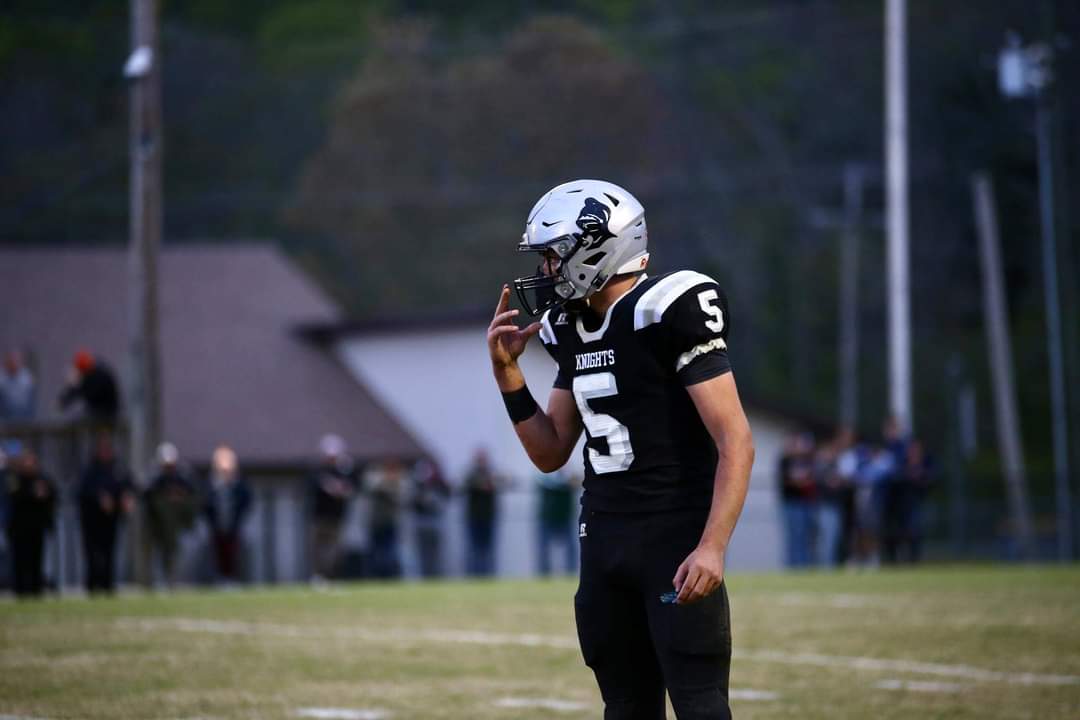 The Robbinsville Black Knights hosted the Mitchell Mountaineers in a second-round playoff game Friday night. It was a back and forth game between two undefeated teams, both hoping to continue towards a possible state championship. While the Mountaineers struck first it was Robbinsville who had the last say. Behind big games from Kage Williams and Nathan Collins, the Knights were able to secure a 28-20 victory. This propels them into a third-round matchup and a rematch with the Murphy Bulldogs.

The first quarter saw Robbinsville take the opening kick, get one first down but were then forced to punt. Mitchell capitalized on stopping the Knights’ first drive of the night, scoring on their first drive of the game. A 42-yard run by Kage Williams was the biggest play of the night offensively for either team. This put the Black Knights in Mountaineer territory to end the first quarter.

In the red zone to start the quarter the Black Knights finished off the drive behind a Nathan Collins 7-yard score. On Mitchells second play of their second drive, we saw the first big mistake of the night for either team. Robbinsville’s Dasan Gross took advantage of an underthrown ball intercepting it in Mitchell territory. Kage Williams broke off his second long run of the night a few plays into the drive. This time he took it all the way into the endzone on a 30-yard run to put the Black Knights up 14-7. After punting the ball back and forth Mitchell had the ball back and found themselves inside the Black Knight 10-yard line on a long throw. They finished of the drive with a short run for a touchdown. Rossi Wachacha busted through on the PAT though to block the point after. This allowed Robbinsville to keep their lead going into halftime 14-13.

Mitchell received the opening kickoff but the Black Knight defense forced a quick three and out. Robbinsville got the ball back but a block in the back on their drive negated a first down forcing them to punt away. Mitchell did get on first down on their next drive but some great pass rush pressure on third down resulted in a sack. Once again forcing the Mountaineers to punt the ball back to Robbinsville. Nathan Collins made quick work the next drive busting a 48-yard run on the first play. Then finished it off with a QB sneak for a touchdown two plays later. The Black Knights took a 21-13 lead after a successful PAT and that’s the score we would have to end the 3rd quarter.

After forcing a turnover on downs while in their own territory the Black Knights got the ball back near the start of the quarter. Nathan Collins picked up right where he left off, breaking a 78-yard touchdown run the extend the Black Knight lead 28-13. Collins broke five tackles and outran a few more on the long run. Mitchell though would just not go away. As it appeared Robbinsville might cruise to victory the Mountaineers found an answer scoring cutting the lead to 28-20. In fact, after getting the ball back from Robbinsville Mitchell had the ball down one score with a chance to tie it up. The Black Knight defense came up with the clutch stop though. Then the Black Knight offense got several big first downs to bleed the clock and not give Mitchell another chance. Robbinsville was able to finish the game in victory formation winning 28-20.

Robbinsville will now host Murphy in a rematch with the winner going to the state championship game. Check back in this week with Team FYN Sports as we will have some great coverage preparing for the big game.