Wow. What a tale of two halves in this one as the Black Knights leave Smoky Mountain with a 28-27 win. Robbinsville led 28-6 at the half thanks to a huge half from Cuttler Adams, but the Mustangs did not give up. They stormed out of the half and shut out the Knights while Isaiah McNeely added 3 big rushing scores. Unfortunately, Zeke Sink missed his second PAT of the game as the Mustangs failed to tie it up in the fourth quarter.

Robbinsville in the first half was unbelievable. Cuttler Adams, learn the name, tallied three big TDs and converted a 2-point conversion for his squad. Adams finished with 220 yards on 25 carries and 2 TDs on the ground while also hauling in a big 53-yard TD pass from QB Donovan Carpenter. The team finished with 382 total yards of offense. As for the defense, they played very well in the first half holding the Mustangs to just 6 points, though they fall apart after halftime, letting the Mustangs get back in the game. Sophomore Roman Jones had himself a night as he led the team in tackles with 18 while Cuttler Adams and Bryce Adams each finished with 10 tackles. Brock Adams and Zeke Silvers were able to pick off the Mustangs QB. 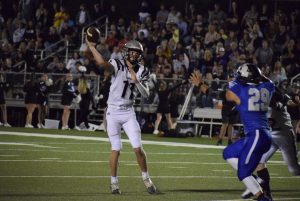 As for Smoky Mountain, after a sluggish first half they fought their way back into the ball game though they ultimately fell short as Sink missed his second PAT of the game. QB Jed West had himself a ball game throwing for 236 yards, completing 24 of his 38 attempts. West also added 91 yards on the ground on 12 attempts. In the second half however, it was the Isaiah McNeely show as he took it to the house three times. He finished with 74 yards on 18 attempts and 3 TDs. Jarek Jones connected with Matt Brown for the other touchdown.

After an exciting one, Robbinsville will head into their Bye Week with a 3-1 record and a non-conference matchup with Alleghany on deck on 9/23. As for the Mustangs, they will open up conference play against the Pisgah Bears (1-2).